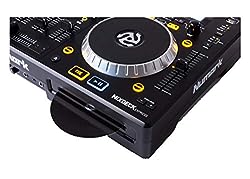 I got mine controller from Numark, which was founded in 1971 in the golden age of Disco. They made the first mixer with a built-in sampler in the 1980s, as well as the first dual-well CD player in the year 1990. When the digital age started, they further established themselves by creating devices that can be hooked up to computers via software.

Fast forward to almost fifty years after their inauguration into the industry, Numark still holds up against many of their competitors. Moreover, the quality of their products can be said to be getting better with all the new innovative technology. This drove me to buy their M2 scratch mixer.

This professional 2-channel scratch mixer measures 11.4 inches in length, 9.5 inches in width, and has a height of 3.6 inches. The M2 has a black finish with a mix of white and black dials and faders. In the middle of the mixer is an LED level indicator.

The dials are separated into five vertical sets by white lines. On the leftmost side are the Mic controls, namely Mic Treble, Bass, and Gain. Feedback is one of the staple issues when using a speaker, so it’s essential to learn this set when it comes to speeches and whatnot. Next to this are the Channel Gain, Treble, Mid, and Bass dials, with the last three painted white color. Below the channel dials is an Input Selector, which may be switched from one side to the other depending on which channel you are using.

The Fader dials comprise the middle set. The topmost is a Master Fader, then the LED level indicator, and finally the Crossfader Mode and Slope. The last two buttons control the channel input whether you want a smooth progression through the tracks or a sudden beat drop. I prefer beat drops, and I am trying to make them my signature sound. We’ll see how that goes.

The next set is identical to the second, which controls the second input source. Finally, the Power LED Indicator is on the upper right part. Directly below it is the Cue Mode selector switch, then the Cue Gain, and the Cue Slider.

On the lower part of the mixer are three slides, two for the channel inputs and one for the Crossfader. The headphones jack is on the lower right corner on the side below the CH2 input.

Being a sophisticated piece of equipment, it is only logical to keep it away from any harsh elements such as wet environments or heat sources. The manual also told users not to use spray cleaners or oils.

If it helps, the way I clean my mixer after use is a soft, clean cloth. I use the corners to wipe the slide controls and a little inside the sliders themselves to protect my device against dust build-up. I also store it in its box after every use.

It’s a little different from traditional mixers with jog wheels and other buttons; however, this is exactly how I want my mixer to be. I want to learn more manual gadgets first before moving on to one with a jog wheel. Besides, this is what my budget allows me at the moment. I am content with my purchase no matter what.

The dials and slide controls feel okay to the touch. They are smooth and easy to use without any impediments out of the box. After the usual inspection for damages and reading the manual, I plugged it into my laptop and began messing around with it.

The Crossfade Mode is a little confusing at first; however, it started making sense after a few days of mixing tracks. I’ve made a couple of tracks that my friends have grown fond of. The experience of using this is a dream come true for me.

The pros are they are inexpensive and easy to use. It isn’t anything mind-blowing or underwhelming. For someone new to the mixing game like me, this is perfect to practice on. I also like how it saves onto my device. I can jow take my music everywhere I go using my phone and a back-up USB drive. It is very much convenient.

There are no cons to this device, in all honesty. Maybe the one thing I don’t like about it was the shipping, but I know that is out of the company’s hands. Other than that, it is nothing but high praise for this equipment.

It is hard to like a product when it isn’t something that you have always wanted. Many of those uninitiated don’t take me seriously when they see my M2, but when they hear the quality, they get hooked. It is not always about people liking your work. What is important is that you like creating your own.

We tested 15 products, researched 19 sources, evaluated 107 reviews and spent 7+ hours on our guide.