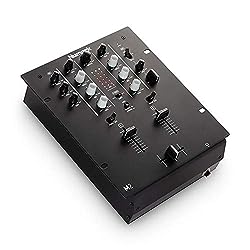 I chose Numark because of its history with DJing. It sprung out of the disco era where everyone’s tastes in music and beats were being opened up by innovative disc jockeys who were not afraid to express themselves. Numark has also been credited with at least two pieces of equipment that helped shape how music is enjoyed today. These are the DJ mixer with a built-in smaller and a dual-well CD player. Because of these achievements, I chose to buy my first equipment from them.

I couldn’t believe my eyes when I received my mixdeck. It’s everything I ever wanted. It has two jog wheel decks atop a bed of mixer dials and buttons. The two sides are mirror images of each other.

Each of the decks is almost in the middle portion of the mixdeck, but it is more on the lower side to give the display screen a little room, as well as other controls. At the uppermost corner is a USB slot. Below are LED light indicators as to the source, along with a button for selecting such. After that is the range, where I can choose between 6%, 12%, or 25%. The slider is directly below that, as well as the pitch blend.

The screen along the top part displays the track and any modifications done through the mixdeck. After that are a series of buttons and a dial for searching through your folders or as an “enter” button. The Back button is connected to it via a painted line. Beside it is the Time button, which displays the time elapsed or time remaining of a song or CD. It is along the same line as the Play Mode button and the Program button. The Play button triggers two playback modes, namely auto-cue and continuous.

On the other hand, the Program button is used to make a sequence of tracks play continuously. The manual gives clear and step-by-step instructions for this. Below these buttons are the Cue button and the Loop In/Out/Reloop buttons.

Arranged clockwise at the corners of the jog wheel are four buttons, namely, Reverse, Brake, Search, and Scratch. These have specific functions for the track being played. It also affects the way the jog wheel behaves depending on which button is engaged. I personally like this feature because it is clearly spread out around the jog wheel. I don’t have to hunt it down in the sea of buttons and dials.

Every purchase comes with two cables, one for power, one for USV, a software CD, a manual, and a warranty booklet.

Aside from the obvious “no extremes” rule in gadgets and equipment, I like adding an extra step of cleaning my mixdeck with a soft clean cloth regularly. I also store it in the box when I am not using it (which is rarely) to avoid dust from accumulating along with the slide controls. That would be a pain to remove once they have settled there.

The manual also recommends that the purchaser check the firmware when they can to ensure the smooth running of the mixdeck. It shows that they are continually trying to improve the quality of the product.

The jog wheel was the first thing I went for in this review. I tried all four buttons, and they work perfectly fine. The jog wheel fascinates me a lot. The fact that there are two had me scratching away at a few tracks I had on repeat just to test their sound. The jog wheel has a smooth adjustment to it. It also responds to the lightest touch, so I don’t have to worry about pressing too hard.

The dials are easy to use, although I am scared that they will break off. I am still trying to get over that small fear in order to enjoy the product even more. The slide controls are the same with a combination of the dials and the jog wheel. I haven’t broken anything off, thank goodness. Hopefully, with more practice, I can get past the idea of fragility I gave this equipment. It is made to withstand tough hours on the club or disco floor, after all.

I like the thought and effort placed into figuring out where everything is on the mixdeck. The more I use them, the more they make sense to me. The LCD display is also a big help in identifying tracks and beats.

What I don’t like about the product is everything feels so fragile to me. I am hoping that it is just a first-timer thing and won’t last long. I don’t want it to impede on me having a good relationship with my equipment.

Starting my DJ journey isn’t easy, but I know I am on my way, thanks to Numark Mixdeck Express. It is a worthy investment for those who are thinking about making and mixing their own tracks. You don’t have to take my word for it. However, that fact will not stop me from highly recommending this equipment.

We tested 16 products, researched 14 sources, evaluated 121 reviews and spent 9+ hours on our guide.