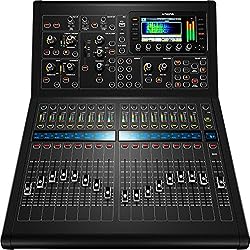 I have been behind dozens of tech booths but I have only seen this rack maybe once or twice. When I decided to create my own booth and work on my own time, this was probably the first piece of equipment I looked for. The shape of it reminded me of both the hunky laptops from the 90s as well as the clunky typewriters that are even older than the laptops. There was a little reverence in the way I held this rack for the first time.

Midas has been designing this equipment for almost fifty years now. It first started as part of the Telex company. In the early 2000s, Bosch acquired Telex and now advertises Midas as part of the Bosch Communications Systems. As part of a huge company chain, Midas has grown more in the last few years with the rise of digital music demand.

To beginners, this rack looks like a laptop that is opened at an obtuse angle. However, it is actually one of the more revolutionary designs in the market, having been crafted by many British vehicle makers.

The rack has a black finish overall. The top part has been sectioned off into small squares with a painted white line showing the sets where the buttons and dials belong. The bottom part is a set of columns of 16 buttons and dials for perfect control over the inputs, consisting of Select, Solo, and Mute buttons, as well as a fader for that specific channel. Interestingly, it has what the company calls a Scribble Strip where information like channel number and input source can be viewed.

The Input channels are on the left side, while the Group/Bus channels are on the right. Similar to the Input channels, the Group/Bus channels have Select, Solo, and Mute buttons. What makes it different is the presence of the COMP button, which indicates whether compression is applied to the audio. Along with this is the Clear Solo button, which applies to all sources and clears such that are assigned to the solo bus.

That was the fun part. The top part is a little more complicated. For starters, there are ten sets of dials and buttons on the top part, excluding the display screen. Another feature is the View button found at the bottom of all ten sets. The first set is the Talkback, with two buttons that light up a bright yellow when engaged. It also has a rotary control.

The Config/PreAmp set houses the Gain rotary control as well as the Frequency rotary control with an LED display of signal input. The Gate and Dynamics sets are separated by an LED Display for the Gate function. Both have a rotary Threshold control. Gate has a specific button to engage the noise gate for the channel selected. Dynamics, on the other hand, has the COMP button for engaging the compressor for the channel.

The Equaliser section has three rotary controls for Width, Frequency, and Gain. Below is the EQ button. To the left is the Mode select and display for High-Shelving, Vintage EQ, and Parametric EQ. The latter two are available for all frequency settings, while the High-Shelving function can only be used with the High two and High setting.

The Record section features the USB slot and has an orange LED indicator when the USB is being read by the rack. The Bus Send set only has the View Button. The Assign set is uncomplicated in that it only has buttons labeled 1 to 8 for assigning channels.

On the other hand, the Main Bus section has two rotary controls and three buttons. Finally, the Fader Layer has 14 buttons for the different layers, Buses, and Inputs. It also houses the buttons for Aux Input and USB along with the DAW remote button. These buttons glow a yellow light when engaged.

It’s a lot to digest. It is essential to practice on the rack first before using it out in the wild since it has so many complicated-looking buttons. A bit of practice won’t hurt. We are all allowed to make mistakes.

The firmware of this device updates fairly regularly. It can be done by downloading the firmware into a USB drive and plugging it into the device.

I usually wipe the surface with a clean cloth before and after use. When the outside is speckled with sweat or other stains, I take a bit of weak alcohol solution and clean it. This rarely happens, though. I don’t recommend it for everyday cleaning.

The first time I used the M32R, it was a little intimidating, especially with all the knobs and slide controls. However, as you grow to understand how it works, it is really not that difficult. I must say that the controls don’t need rough or hard presses just to make them work. It takes just the right amount of pressure to transition tracks and channels smoothly.

Feedback is usually an issue with audio equipment, but not this one. It can be easily steered out of those dangerous waters with just a light touch of a slider or the dial at the top of the rack.

The one feature that makes it unique is both an advantage and a disadvantage. Having many options is great, especially for large events. However, if an inexperienced person is behind the controls, the process can be a little daunting.

Midas M32R is a worthy investment for years to come. With a constantly updating firmware and interactive spread of buttons, dials, and slide controls, it truly is a gateway to a new dawn in the audio industry.

We tested 10 products, researched 17 sources, evaluated 120 reviews and spent 7+ hours on our guide.