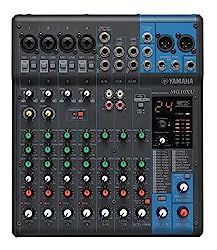 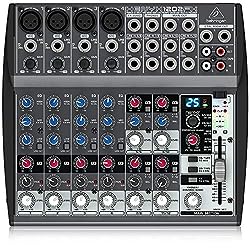 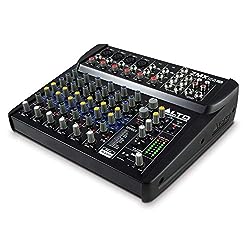 A small mixer can be an essential item, especially if you are performing live, or making and recording your music, a mixer is a straightforward product, there are 2 things everyone should keep in mind of when buying one of these mixers, and one of those things is how many channels do you need, and the other is, do you need the phantom power and effects, which is getting more and more common nowadays, but still there are some instances that a mixer won’t include this. Without anything else, here are the best small mixers for live performance.

Yamaha’s are famous for its reliability and well-engineered products, and this small mixer is not an exception, this mixer is a 10 channel mixer, complete with all the essential controls, and a powder-coated metal chassis to enclose it all off. Channels 1-4 has an XLR/TRS combo input, and these channels are supported with phantom power, and these channels can be easily adjusted with dedicated 3 band equalizers.

Channels 1-2 have a dedicated compressor, which is great when you have guitars or other instruments plugged in as it makes the instrument sound more tight, clear, and powerful, it can also be used for enhancing vocal quality as well.

In terms of audio performance, playing music with no effects and flat tuning as a test turned out that this mixer spits out clear and clean music, and it is partially thanks to the availability of stereo XLR outputs, which is surprising to be missing on some modern mixers. But then the clean sound output is mostly thanks to the Class-A preamps and amps this mixer has.

This mixer can also be used as an external sound driver for computers, which can give you more flexibility and ease with adjusting and monitoring your mixer. This Mixer is a good all-around mixer, aimed for starting music professionals who are looking for a mixer that works well, and will work well for many years to come. Overall, this is highly recommended for anyone starting with music since this is truly one of the best small mixers you can get.

The Behringer XENYX 1202FX is a famous compact mixer that served many music professionals before. A huge setback for many people is that this mixer has an outdated design since it has been released for over a decade now.

This mixer has a total of 12 inputs, 4 or those have separate Quarter-inch and XLR jacks, 4 XENYX Mic preamps are also found on channel 1-4, the mic preamps turns out to be good, but then so many professionals do not recommend this, as these preamps tend to be noisy and sounds a bit brittle overall. It is also worth noting that channels 1-4 also has dedicated 3 band EQs that are said to be similar to systems found on British audio systems, which overall gives a warm tone.

This mixer has 5 built-in effects with 100 presets for those effects, the effects are reverb, delay, modulations, pitch and some presets are multi-effects which combines several effects at once. A huge letdown with this mixer is that this doesn’t have an XLR output, instead, you can get your audio out using 2 quarter-inch jacks or via RCA cables.  In terms of build quality, this mixer did pretty well for a mostly plastic build.

Overall this is also a pretty good beginner mixer as this does get up to 12 inputs straight from the box, and with 100 presets, you can get a huge variety of tones and effects from this. But you do have to deal with the preamps that have the reputation of sounding brittle and weak, but then, for a live event, this should be enough for a decent setup, in the end, the compact package does make this one of the best small mixers for live performance.

The Alto Professional ZMX122FX is a bit similar to the Behringer XENYX 1202FX as this mixer also supports up to 12 input channels, and the main thing that I notice with this mixer is that it has 6 rows of identical controls which are again, 3 band EQ, AUX Send, Pan, and a volume level, which are all knobs. In terms of input, channel 1-4 has an input for an XLR or a quarter-inch jack, while channel 5-8 are all quarter-inch jacks, and the XLR inputs does have phantom power for your condenser microphones.

In terms of performance, this mixer has a warm sounding pre-amp that you can love or hate depending on your preference, this also has 16 effects with 16 presets, giving it a total of 256 onboard effects, one gripe that I have with the effects is that it is operated using dials, and it would be better to trade that spot for better electronics.

Overall, this product is pretty straightforward with its design, but yes it is a bit lackluster with its design, but considering this is a bit newer than the Behringer XENYX 1202FX, maybe it is better to get a newer system, but otherwise, this does the job reliably well, and seems durable, and sounds decent. With all said, this is still a good buy, and still one of the best small mixer for live performance.

To Sum it Up

That is our top picks for the best small mixers for live performance. Honestly, you can get what you need when you decide that you want to purchase one of the products on this list, but then you should also consider the features you like and the channels that you need, just so you can get your mixer without regrets.