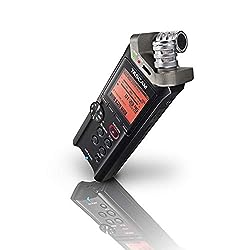 Famous for their practicality and versatility Portable Digital Recorder became used from recording song drafts and ideas to recording actual live performances. Our basis for listing these products are for their Audio Quality, Battery life, and the extra features that are useful for professionals.

This small and handy recorder offers an easy to use interface recommended by filmmakers and YouTube Musicians. Let’s start with the Built-in Stereo Condenser Microphone which by itself is phenomenal for voice recording, the built-in microphone can also pick up low volumes without distortion.

Software assisted correction features like a Low Cut filter, Limiter, and Autolevel are combined with this recorder. The Low Cut Filter worked very well for cutting ambient noise and even eliminating popping p sounds. The H1n supported Low Cut for up to 160Hz.

The Limiter feature on the other hand is what we expect it to be, it somewhat makes the audio seem unnatural with the audio volume unexpectedly dips down sometimes, and I wouldn’t recommend using it on the H1n unless you need it. And the auto level worked surprisingly well.

The H1n supports audio outputs of MP3 from 48kbps to 320kbps and WAV at 16 and 24 bit with frequencies of 44.1kHz to 96kHz. 2 AAA Batteries are used to power the H1n offering up to 10 hours of continuous recording.

Even though the Tascam DR22-WL is an older model, it is still a competitor with the newer Zoom H1n, The Tascam DR22-WL is the best portable digital recorder for audio engineers recording live music, considering its remote control capabilities and easy to use and precise interface, I think this is well suited for the audio engineer, or the solo artist if the artist somewhat prefers this over the Zoom H1n.

The Zoom H6 is another variant that came from the H-series like the H1 previously listed in this article, The Zoom H6 offers the same easy to use interface with some added features, the main addition to this recorder is the additional track recording capabilities with now having up to 6 tracks, compared to the H1n having only 2 tracks support this is a very significant upgrade over the lower H-Series recorders.

The Zoom H6 also supports interchangeable Zoom Mic Capsules which adds another factor of versatility. You can use the X/Y Stereo dual Mic that is in the H1n and the next 10 seconds swap it out with a Shotgun Mic, a Mid Side Mic, or the EXH-6 DUAL XLR/TRS Combo Capsule that will give you additional 2 XLR/TRS jacks giving possibility to the promised 6 tracks of recording.

A good feature that the H6 has is the support of backup recording that records a duplicate of the L/R input with 12 dB less input gain giving you extra insurance that your file will be fine even if the original file was too loud, the 12 dB less backup file should sound fine. Another feature is the support for the RCH-6 remote

With concern to power the H6 uses 4 AA Batteries that can keep the H6 recording continuously for up to 20 hours 44.1kHz/16-bit file using the X/Y Stereo Mic capsule. The H6 can also support phantom power for condenser microphones connected through the XLR/TRS jacks.

The H6 is the best portable digital recorder for live music of bands and multi-instrumentalists.

To Sum it up

There you have our pick of the best portable digital recorder for live music. Portable Digital Recorders have become so good that it was really hard to see if there are differences in audio quality, and in the end it all came down to the features and the reliability of the recorder that hailed them as the best.

Of course, everyone needed something for their needs so we based that on the number of inputs that these recorders can support, with the most inputs recommended bands and multi-instrumentalists. Know how many inputs you need and then you can’t go wrong with any of these choices. Happy Recording!