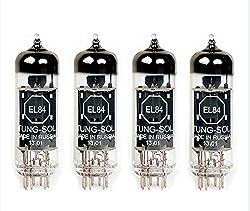 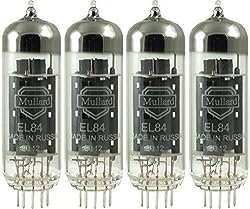 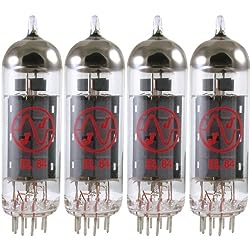 Electric guitars are nothing without their amplifiers. It is a beautiful combination of elegance and solidity when played side by side. Power or output tubes make that combination work. They are similar to transistors, but the latter is not made of glass. A small vacuum tube holds the electric component made up of a filament, an anode, and a cathode. Power tubes are like mini-amplifiers that help an electric guitar reach a playable level even before reaching the actual amplifier.

However, an overarching disadvantage is that power tubes are fragile, prone to overheating, and hard to replace manually, making them expensive. With that in mind, it is essential to invest in the right power tube to avoid costly replacements in the long run. It is also necessary to know how to care for these critical components. This review focuses on some of the better power tubes in the market.

Weighing 3.19 ounces, the Tung-Sol Matched Quad is advertised as a must-have for those who are using American amplifiers. It is also regarded as one of the best power tubes for Vox AC-30 amplifiers.

It is a small glass tube with an opaque white stamp showing the power tube number, name of the manufacturer, and the place where it is manufactured.

Most of the reviews online are glowing ones, with nothing but praises for the Tung-Sol Matched Quads. However, one of the reviews showed a bad review from an international customer—something to be wary of those not living in the US.

One helpful tip I saw while browsing through this catalog is the fact that the tubes sometimes glow when in use. The seller said that the glow is not an indicator of good or bad quality. Another said that so long as the guitar plays, the glows are unimportant.

This is a Russian reissue of the original EL84. It has black plates, carbonized screens, and gold-plated grids. It weighs 3.35 ounces.

According to one of the Q and A items, the old machinery used to produce the original EL48 tubes were purchased by Mullard, and that is how they can produce this copy as the masterpiece it once was.

Another useful tip I found is that the Mullard Reissue EL84 are shipped in individual boxes. Logically, there wouldn’t be any issue as to the glass tubes knocking against each other. The only thing to watch out for is bad handling during shipping.

With only a handful of four-star reviews in a line of five-star reviews, Mullard already has the edge over the Tung-Sol Matched Quad. Customers are happy with their sounds, which are sharper and fuller. A few of them described the sounds emanating from their guitars as warm, and I take that as a good sign.

The tubes themselves have red plating indicating the logo of the brand and the power tube number.

JJ Electronic has the most number of reviews on a single site. Most of the low ratings are due to the lousy packaging and busted tubes right out of the box. The most recent reviews are more promising, with a lot of five stars, particularly with the packaging. It looks like the company stepped up its packaging game.

It’s a different thing with longevity, though, with only four stars out of five stars. In addition to the busted tubes right out of the box, many are busted within hours from instalment.

The three EL84 tubes have a height of 2.75 inches without the pins and a diameter of .87 inches, although there is a disclaimer that the measurements may be slightly off due to glass manufacturing.

For this comparison, I am going with JJ Electronics. Despite the bad reviews, the more recent ones seem promising. Plus, there is no pressure to buy four quads if you only need one.

We tested 5 products, researched 8 sources, evaluated 40 reviews and spent 8+ hours on our guide.